Santoni’s and the Sagamore Wall Box

About twenty-two years ago on my birthday I was given the unique and special gift of one of the Sagamore Farms’ stall boxes, box number 4. It was given to me by a dear friend who was managing the farm for Jim Ward, shortly after he had purchased it from Alfred Vanderbilt, the long-time owner and racing legend. I remember that beautiful sunny April day like it was yesterday. At the time I was given “the box”, I didn’t know much about the deep history of Sagamore Farm, the racing legend Native Dancer, nor of Mr. Vanderbilt. What I did know, was that it was a beautiful horse farm in Worthington Valley, and that the late, lovely Jackie Gibson, who worked for Mr. Ferguson, the man who managed the farm for Alfred Vanderbilt, would stop by Santoni’s every day to pick up his copy of the Racing Form. Although I had much to learn, something inside told me that I had a special artifact that would be in my care for some time to come. 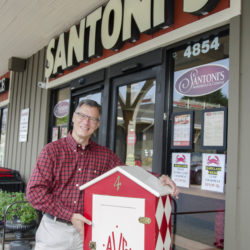 Lou Santoni and the Wall Box

Having something unique like this, I remember pondering where to put it. The answer would come quickly to me, that it should be placed somewhere where others who knew the history of this great farm could enjoy it as well. So, knowing that we had so many locals coming into our store, Santoni’s of Glyndon, I found a prominent spot in the front to which everyone could see. And just as I suspected, people started noticing and commenting. It was a really cool looking box, in pristine condition, in the traditional red and white Sagamore Racing colors, and it weighed a ton. Of the many questions I received about the box, the two most common were, “How did you come to get it?” And, “Do you want to sell it?”

So many years had passed, and our box has been displayed for everyone to enjoy at Santoni’s when one day I received an inquiry from Randy Lewis and Sue Kenny of Sagamore Farm and Sagamore Racing asking if I would consider giving it up. We do catering for Randy and Under Armour at the farm, and one day when he stopped by the store to shop he noticed it. I asked Randy and Sue why they wanted it. That’s when the real story in my mind begins. You see, as most folks around here know, when Jim Ward decided to sell Sagamore Farm, there was a gentleman who had the means, and a deep appreciation of the farm and of Maryland Racing. This man was Kevin Plank, and he would be the next owner of Sagamore… the next person to steward this amazing resource back to prominence. And in doing so, Kevin has refurbished the farm, invested in leadership and a vision to make it reflective of its proud heritage. He has made countless moves to fulfill his vision, but one of the many respectful things he has done was to hire Sue Kenny as the Historian to capture the past and reflect the Sagamore’s legendary journey. If you have ever of had the gift of visiting the mansion at the top of the hill overlooking the property, you would see in one of the main rooms in the house, a tribute to Alfred Vanderbilt the second, the owner of the farm for over 50 years who brought it into its prominence.

Thus, the request for the box. Kevin, Sue and Randy had reconnected with the late Alfred Vanderbilt’s son, Alfred Vanderbilt the 3rd out of respect for his father and the history that his family had fostered at the farm. They knew of this original box that I had at Santoni’s, and they thought it would be a meaningful gesture if they could obtain it for Alfred as a gift to honor his father. It would also serve as a precious memory for Alfred knowing that he had grown up spending countless hours at the farm.

I remembered thinking on it a lot before coming to a decision. I appreciated the box very much, and the kind spirit of the good man who gave it to me those many years ago. But the thing that kept coming to my mind was this: although the box was in my possession, I was just the caretaker for a moment in time. That box, just as the good folks at Sagamore Racing had hoped for, would be better served in the possession of the son of the man who invested much of his life to make Sagamore Farm the special place that it was, and is to become again. And even though my friends at the farm offered compensation, I knew in my heart that the only thing to do was to give it away. So, I called Alfred personally and let him know that I would be dropping the box off to Randy Lewis and Sue Kenny and that they would carefully ship it to his home in Connecticut. As you can imagine, he was gracious beyond words, and now has box number 4 as a memory of a time gone by, and of his father, and of his time spent at this beautiful place we call Sagamore Farm. 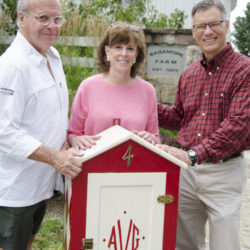 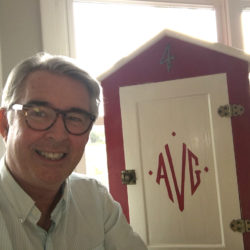 Alfred Vanderbilt and the Wall Box

In the end, the joy I received by giving this special box to Mr. Vanderbilt and the memories that it evokes of a man and his father have been priceless. To those who have wondered where that box at the front of Santoni’s has gone – you now know the rest of the story…